I’m always excited when Jason Hardy comes to sing with us because I sang in choir with him when we were both undergrads at Emory University, so it feels like a class reunion. He’s exactly the same guy now that he was back then – talented, handsome, fun, and so, so nice. He’s got a great work ethic, too, which is another reason we love having him here (and possibly the reason he’s an opera singer and I just sell the tickets, but let’s not make this all about me).

Jason had a few really rough years. He stood by the side of his wife, Bevelyn, as she fought with cancer, and he took sole custody of her son, Lucas, and their daughter, Sabrina, after her death in 2007. He stayed as upbeat and friendly as he could during that time, but I could see and feel the spark missing from his eyes.

Well, guess what? Jason’s engaged!!! He proposed onstage, in full Figaro costume, to singer Carrie Kahl (whom the complicit director had sneakily hired as a last-minute replacement for the role of Barbarina), and let me tell you, his spark is back! He stopped by today to say hello, and he is obviously a man who is giddy in love. 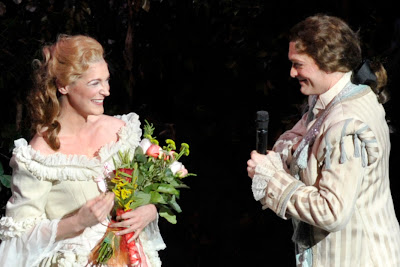 The only problem? With both of them working as professional singers and raising two children, there has been no time or money to plan a wedding. Well, Jason, The Atlanta Opera wants to help! We’re asking all of our staff, singers, patrons, and fans to vote for you in Crate & Barrel’s Ultimate Wedding Contest!

Go here to read Jason and Carrie’s story and to place your vote for this couple, who made it through a Puccini-style romantic tragedy to find a happy ending worthy of Mozart.