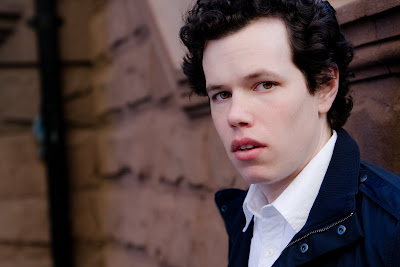 Così fan tutte is Mozart’s comedic 18th century reality show, and caught in the mix is the charming, beguiling, and fairly naive, Ferrando, played by Matthew Plenk. This is Matthew’s debut with The Atlanta Opera, and already he’s making a lasting impression. All’s fair in love and war? All’s well that ends well? Let’s have Matthew help us decide, and learn a little about “real life” along the way…

1. Where do you live when you’re not traveling?
I live at home in NYC with my wife and our 2 cats.

2. What was your first opera experience?My first operatic experience wasn’t until I started to audition for colleges as a Music Education major. I had to learn an aria for the auditions. Also as a high school senior a group from the National Honor Society went into “the city” to see Taming of the Shrew, a new production for American Ballet Theatre, and it was at the Met. It was my first time in that building, and it looked so big and grand. The dream of actually singing there had barely even crossed my mind.

3. Why did you choose to be a singer?
Mostly because I had been strongly encouraged to do so when I auditioned for the Hartt School. I can still remember Jerry Pruett and Fritz Moses sitting in the audition asking if I would consider at least a double major if not completely switching to performance.

4. What’s the best thing about this profession? What’s the worst thing?
Best: Being able to make music my job, and also the ability to hopefully let someone be in another world only for a few hours.
Worst: The traveling is hard. It is tough to be away from home and your loved ones. It is not the 9-5 house-in-the-‘burbs lifestyle that we all look to as the “perfect family,” but “c’est la vie.”

5. When did you realize that opera was your career?
I think I am still realizing it. I had been in the shelter of the Lindemann Young Artist Development Program (LYADP) for the past 3 years, and taking off the training wheels is a shock at first.

6. What has been the biggest challenge in your performance career?
So far it has been developing all the skills needed to do this well. The LYADP certainly helped by letting me figure out what I needed to work on and also giving me the tools to take with me out in the real world of opera.

7. What is your dream role?
Hard to say, but right now I am happy to sing almost anything people ask me to. But to throw one out there let’s say . . . Faust!?

8. Who do you most admire in the opera business?
That has to go to Maestro James Levine. Having the opportunity to work with him for a number of years in a close setting has certainly changed my understating of music. To see that man work is incredible.

9. Do you still get nervous after all these years?
There is always a certain nervous feeling that comes with any performance and also at the beginning of the rehearsal period. You never know who you are going to work with for a month, and you always hope the group is as great as this group is for Così fan tutte. With the performance anxiety, I try and find a way to use the stress as a way to build up energy for the performance, not let it get the better of me, and use it for the betterment of the performance.

10. Who has influenced you most throughout your career?Mo. Levine in the recent past, but in the longer term, I would say that my wife has played a big part. We met over 10 years ago, and she has always been ultra supportive, and we talk about music and the biz a lot. We also try and make decisions together, especially when it comes to travel and time away. It certainly affects her life too. She also has just about the best pair of ears out there, so I always know that I am getting great true feedback.

11. What do you like to do when you’re not singing?
It depends on the weather. If it is warm enough, I like getting out on the golf course. I have only played once here in Atlanta. And in the winter I love to ski. The rest of my time I like to get outside as much as possible, and do a whole range of things.

12. If you were not a singer, what would you be?
I guess the next choice would be voice teacher, but that is a little too related. How about something more practical like a lawyer, or doctor? I certainly went through that amount of school.

13. Obviously you travel extensively in this profession. What has been your best travel experience? What has been the worst?Best: A concert I did in LA. I was able to see my brother, and the weather was great. I like when the place I go has a different weather pattern than where I have been. Worst: Probably the commute from NYC to ATL. The travel wasn’t bad but starting Così here while finishing Lucia at the Met made for a long weekend!!

14. How do you think performing in Atlanta is different than in other cities?
Not sure yet. I get the feeling that the audience will be more die-hards who only get the 3-4 shows that The Atlanta Opera puts on. NYC is so saturated with performances one tends to take them for granted sometimes.

15. Is it more exciting to perform for a hometown crowd, or does it make you more nervous?
I like the hometown crowd. It is great to know that you have your own built in fans. But hopefully I can build up those fan bases in more places. The more people you know the closer it feels to home.

16. Do you have any quirky routines or superstitions that you follow before a performance?
Not really. I guess the singers’ warm-up has some funny things in it, but other than that I just like to get a good stretch in so that I can move well on stage.

17. What has been your most memorable stage moment – good or bad?
Singing at the opening night concert at Tanglewood with Mo. Levine. It was great weather and to see all 6,000 people out on the lawn truly enjoying it was a great time.

18. If you were stranded on a deserted island, what three CDs would you most want to have?That’s tough. Meat Loaf – “Bat Out of Hell”; Sir Thomas Allen – “On the Idle Hill of Summer”; and Pavarotti and Freni – La bohème. The last one is hard to choose. And wouldn’t I just bring my iPhone with a solar charger : )?