Q & A with Tomer Zvulun, Director of Lucia di Lammermoor

While Lucia di Lammermoor has been performed many times, The Atlanta Opera’s production, beginning this weekend, promises to take this classic bel canto work to new heights. The opera opens on Saturday, November 12th at the Cobb Energy Centre, and is directed by “one of opera’s most exciting young directors,” Tomer Zvulun.

Tomer has worked with The Atlanta Opera three times in the past, directing the critically acclaimed Flying Dutchman, The Magic Flute, and La traviata. One of Tomer’s gifts as a director is his ability to pull dramatic performances from singers, and combine different aspects from other productions to create a unique theatrical experience. For The Atlanta Opera’s Lucia, Tomer will be utilizing aspects from productions he directed with the Seattle Opera and Opera Cleveland.
Tomer Zvulun sat down to discuss his history with The Atlanta Opera, as well as his thoughts on the upcoming production. 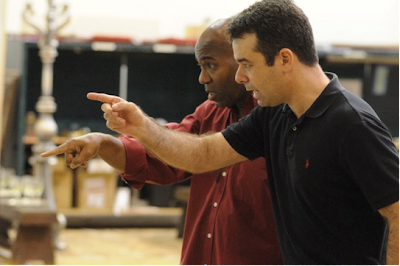 Tomer directing Arthur Woodley, who plays Raimondo in both The Seattle Opera and The Atlanta Opera’s productions of Lucia di Lammermoor. Photo courtesy of Tomer Zvulun.
1. Tell me about your history with The Atlanta Opera. This is my fourth show with The Atlanta Opera. I started here as an Assistant Director for La traviata with Stage Director Rhoda Levine. La traviata also happened to be Zurich General Director Dennis Hanthorn and Music Director Arthur Fagen’s first show with the opera. I returned in 2009 to direct The Flying Dutchman and I was recently here (in 2010) for The Magic Flute.


First, the casting choices here are always very strong and exciting. Dennis and Arthur are good at finding singers for difficult roles like “Lucia” and the “Flying Dutchman.” They cast singers who are not only musically and vocally suited to the roles, but also dramatically strong actors. Also, working with the chorus and Walter Huff is one of the highlights of my time in Atlanta. They are a great group of people who are very strong musically, and are led by a truly outstanding chorus master.


The Cobb Energy Performing Arts Centre is a state of the art performance space. It is an excellent technical facility with great acoustics, which is very important in opera. I love getting to work there.


The audience here in Atlanta is something that I like. They are very open to new ideas and new interpretations. What proved this to me was The Magic Flute, in 2010. It was an unusual production, but the audience was so engaged in the piece. This upcoming production of Lucia is also different, but I have no doubt Atlanta audiences will like it.


3. What is it like working with Arthur Fagen? We are personal friends, so it is very easy to communicate artistically about things. We can say anything to each other, and trust each other’s taste and support. This is our fourth production together in the past two years, and we have a great partnership. We have quite a few projects planned for the future.


4. What do you like about the Atlanta Opera’s Lucia cast? I love it that the whole cast are singing actors. They are not just superb singers. Many times, when you do a bel canto opera, it is all about the melismas and the flourishing beauty of the voice and music. But in the Atlanta Opera’s case, we have intensely committed actors that are very interested in characterization and story-telling, but can also sing this music beautifully.


5. Who have you worked with previously in this cast? I have worked with a lot of the cast before. Arthur Woodley is an old collaborator of mine from the Seattle Opera’s productions of The Ring Cycle and Lucia di Lammermoor. I also worked with Tim Culver on Lucia at Opera Cleveland and am very happy that he’s here. Stephen Powell and I worked together at the New York City Opera, and I was also able to direct Susan Nicely in The Flying Dutchman here. I have not, however, worked with Jonathan Boyd until this production, but I love what he is doing with his interpretation of Edgardo so far.


I’ve never created a show from scratch with Georgia Jarman before, but we have known each other forever. I worked with her at the Met when she had to step in when a singer in La Rondine was sick. So, working on this show is like a reunion!


6. Tell me about the members of the production team, other than Arthur, that you’ve worked with before. The fact that we were able to get the same designers who originated the Seattle and Cleveland productions is one of the most exciting things about this production. The choreographer, Rosa Mercedes, is a leading choreographer in the business, and a fantastic collaborator who I am happy to have here. We worked together in Seattle on this same production. Also, three people who are really crucial to bringing the stage to life are Scenic Designer Erhard Rom, Lighting Designer Robert Wierzel, and Projection Designer Ruppert Bohle. Erhard Rom is one of the busiest designers working in the business today, and we are very excited to have him here for his debut with The Atlanta Opera. I enjoy collaborating with Robert Wierzel, who was nominated for a Tony® last year. Finally, Projection Designer Ruppert Bohle was flown in from France for this production, and we worked together on Opera Cleveland’s production of Lucia, so it is wonderful to have him here.


7. Tell us more about the Seattle Opera and Opera Cleveland’s productions of Lucia that you previously worked on, and how you’ve combined those two shows to create the Atlanta Opera’s production. Each production (Seattle and Cleveland) had very successful elements to them. Cleveland’s concept for Lucia was very bold and original. We transposed the setting of the opera to a mafia world. I am a film buff, so movies influenced me and helped inspire me to create a Sicilian or Godfather Lucia. The set was a unit set, which utilized lighting and projections in new ways. It was very successful in Cleveland, and I loved the concept.


Seattle Opera’s production was more traditional than Cleveland’s, but still unique. We decided to set it in the early Victorian period- mid-19th century. What we are taking from this production are the costumes. They work very well with the themes in Lucia di Lammermoor because the Victorian world, and society conventions, were very suffocating to women. Even in the way they dressed with corsets and hoopskirts. Lucia had no control over her life and is forced to fit certain social conventions and expectations that are expected from women in that time. Working on these two productions helped create the vision for this upcoming production. 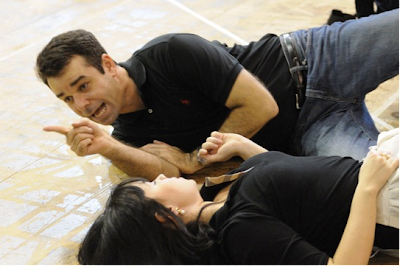 Tomer working with Aleksandra Kurzak, who performed the title role of Lucia in The Seattle Opera’s production. Photo by Bill Mohn.
With the influences of Opera Cleveland and Seattle Opera’s productions, as well as some tricks of our own, the Atlanta Opera’s production of Lucia di Lammermoor promises to be a spectacular experience. For a video of Tomer directing Lucia at Opera Cleveland, visit our Tumblr blog. If you haven’t purchased your tickets yet, there is still time before the show opens this Saturday, November 12th. Please visit our website or call 404.881.8885.