Dining with the Devil: A Foodie’s Guide to Tosca… 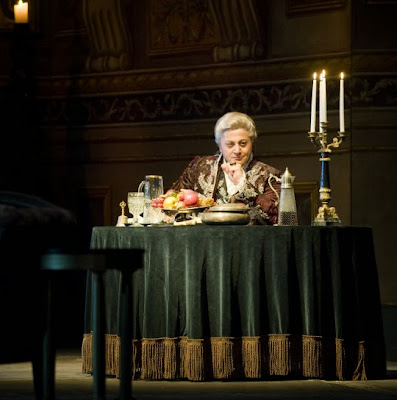 The setting of Tosca in Rome opens up so many gastronomic possibilities! In the case of Tosca, it’s fun to speculate about what the characters were actually eating, and in the case of a fantastic evening with friends, we would like to propose a few recipes to get you in the mood before you come see it at the Cobb Energy Centre, October 5 to 13.

Tosca’s lover, Cavaradossi, had a basket lunch brought to him by the church sacristan. According to master-chef, Lynne Rossetto Kasper, this lunch was probably not very different from what is eaten in Rome today. It would have had a loaf of white bread because Cavaradossi was a nobleman (peasants ate dark bread), and a local sheep cheese. There would have been a farm-cured salami and a jug of white wine from Orvieto.**

Farm-cured salami, local sheep cheese, and good bread would also serve as a lovely appetizer, along with some celebratory white wine pairings… 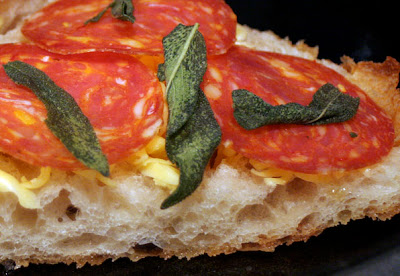 At the beginning of Act IV of Tosca, the evil Baron Scarpia is eating supper in a room lit only by two candles and a candelabra on his table. But what could Scarpia have been eating on that fateful night?

As the police chief of Rome, he would have eaten in the style of Roman nobility. Since it was evening, his dinner was a lighter version of the main meal of the day, eaten at mid-afternoon.   Food was status for people like Scarpia. His dinner earlier in the day would probably have begun with a tray of artfully arranged small appetizers like prosciutto wrapped in colorful marzipan, savory tartlets of nuts and greens, and small fritters of sweetbreads or, perhaps, oysters.**

A soup would follow this course – possibly a capon broth with tiny ravioli floating in it, with the filling consisting of breast of capon, cheese, cinnamon, nutmeg, marrow, and herbs. Then there would be either a roasted whole fish stuffed with truffles, or hare cooked in a pungent sweet/sour sauce of black pepper, sugar, vinegar, nuts, fruits, and red wine.**

Once this dish was removed, the servants would present a large silver platter with a whole baby lamb roasted and turned on a spit over an open fire until glazed to a mahogany brown. The tender meat would have been laced with strips of prosciutto and basted with wine and herbs.**

For a yummy, Tosca-themed main course, we would suggest a Saltimbocca Barone Scarpia with a classic Roman Salad Puntare. 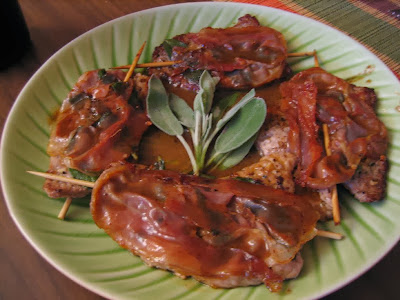 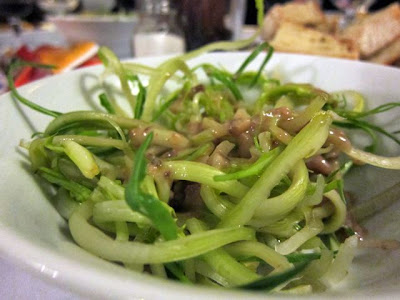 For dessert, Scarpia probably had trays of tiny cookies and fanciful marzipan and, perhaps, an elaborate molded frozen dessert layering cake and iced cream. When Tosca enters, we always imagine that Scarpia was just finishing the dessert.

In honor of our tragic heroine, Floria Tosca, ending the evening on a sweet note with an Almond Tosca Cake should be just the ticket…. 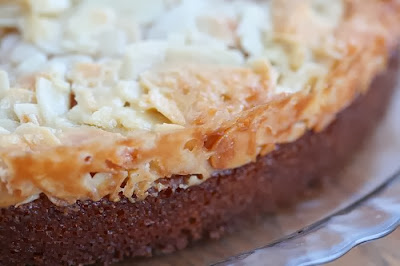 That Spanish wine referred to in Tosca might have been a sweet one – possibly a dark golden and rich Oloroso Sherry, which would be a lovely aperitif…. 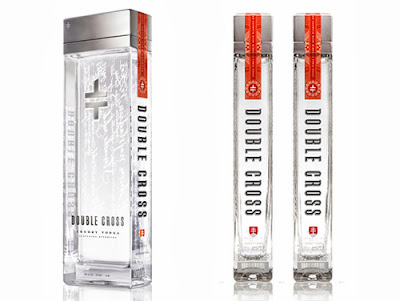 See you at the Opera! For tickets and info, please visit atlantaopera.org.