An Entire Opera Written and Performed in 24 Hours? 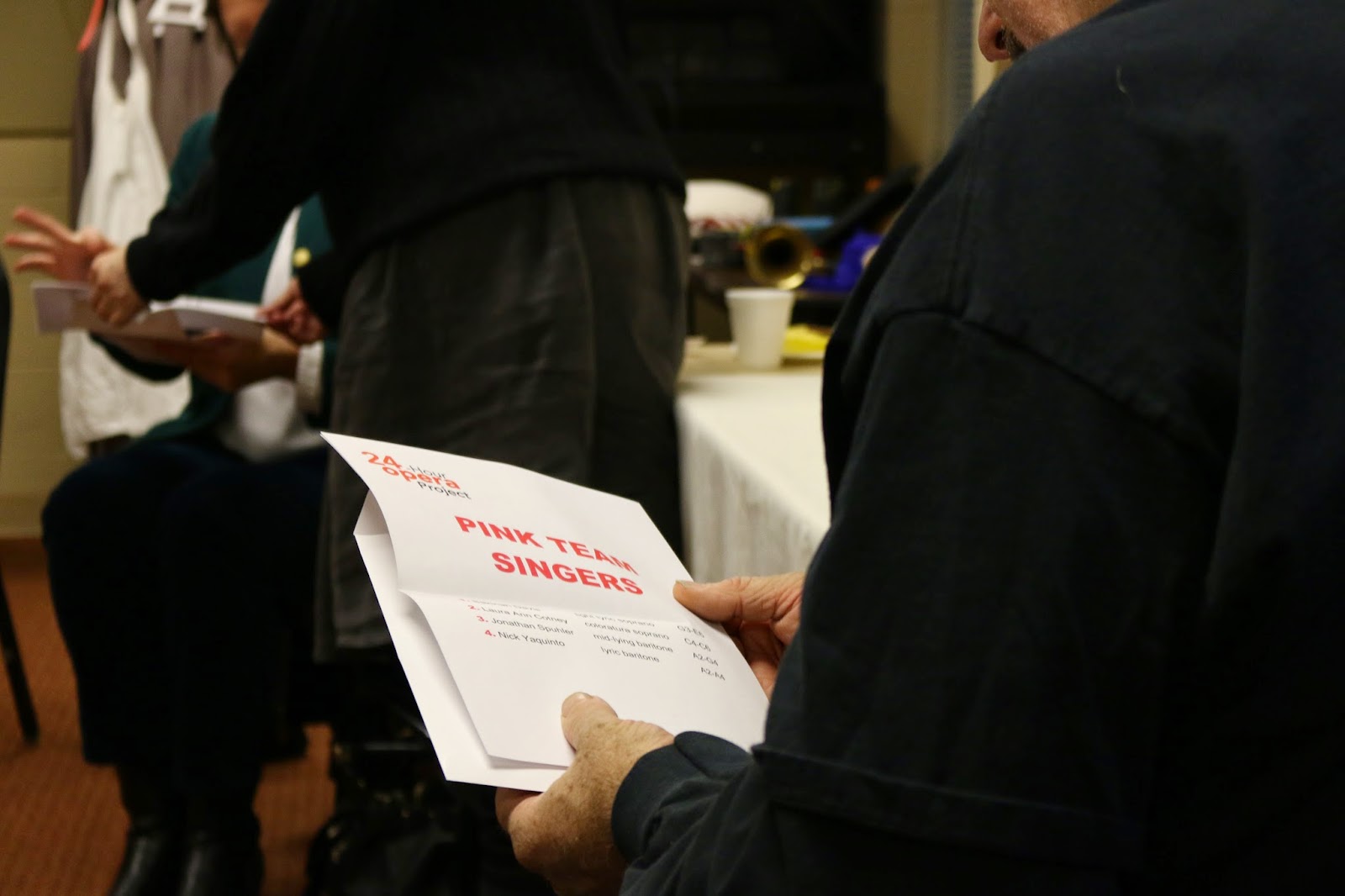 It all began and ended with four simple colors: pink, purple, orange, and green.

It was a rainy Friday morning at 9 o’clock, and a raw chill seemed to hush the usual whir of cars speeding down Peachtree. The drizzle dampened the brick exterior of First Presbyterian with a fresh coat of dew. Inside, four composers and four librettists, some veterans and some newbies, sat wondering with whom they would be paired. Four colors sat in a basket, each hand hesitantly grabbing its owner’s fate. The teams were formed:
Pink: Composer Marvin Carlton & Librettist Sumita Chakraborty
Purple: Composer Andy Bayles & Librettist Daniel Bosch
Orange: Composer Natalie Williams & Librettist Madeleine St. Romain
Green: Composer Lauren McCall & Librettist Vynnie Meli 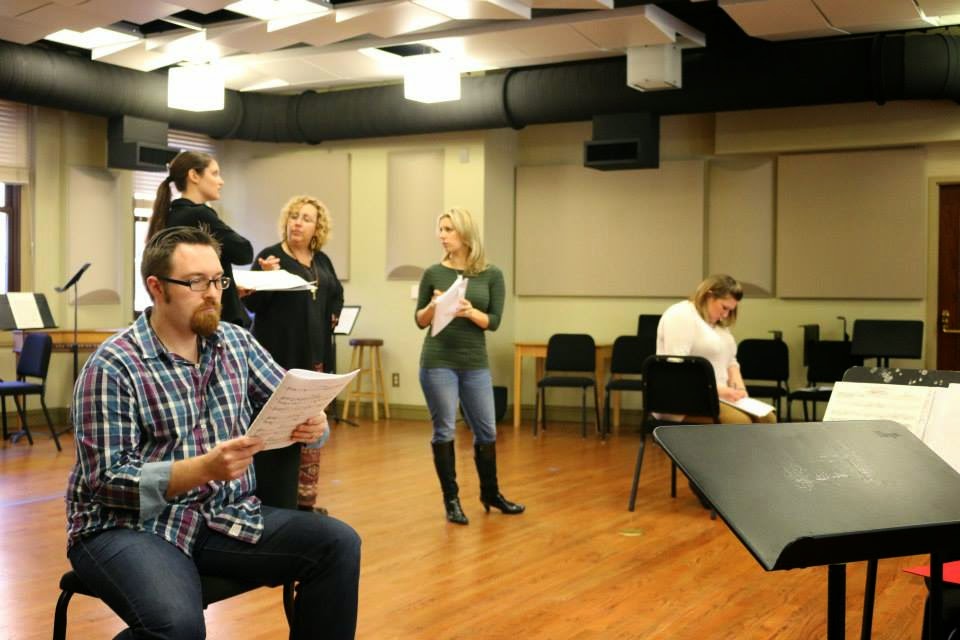 The teams immediately broke free to work for the next 12 hours around their baby grands. Working with a mandatory prop (a hideous polyester shirt, a telephone, a camera, and a bouquet of flowers, respectively) and attempting to incorporate the overarching theme of “Not for the Faint of Heart,” the courageous composers and librettists crafted and honed their pieces through Friday afternoon into the evening until 10 p.m. 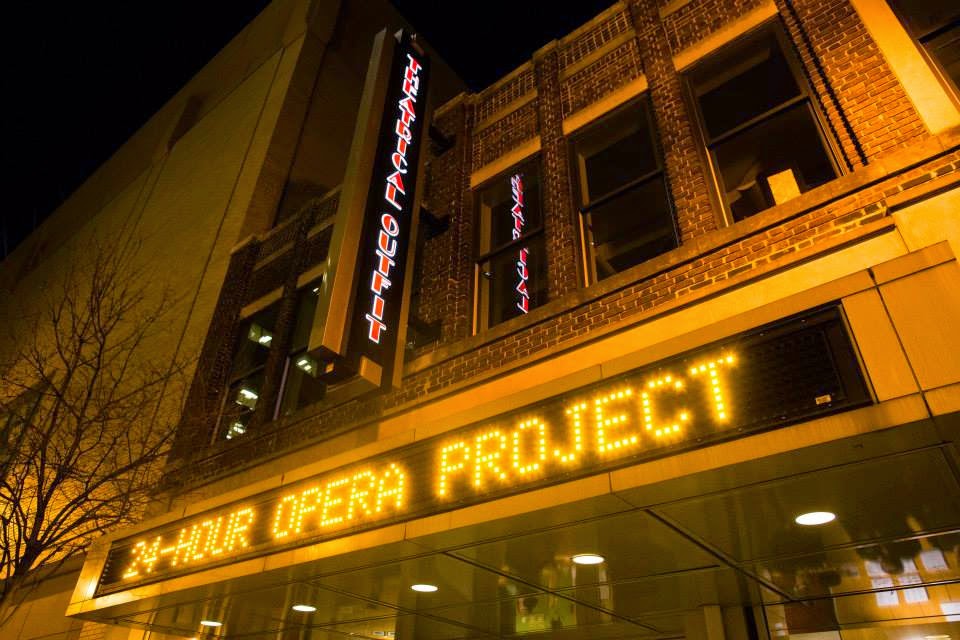 Fast forward to Saturday evening. Everyone moved downtown to Theatrical Outfit, where the madness was about to begin. As the crowds filed into the lobby of the theatre, the singers and directors rehearsed their pieces for one last time.

Host and Atlanta Opera Director of Marketing and Communications, Dave Paule, jumped on stage to start the evening. He introduced the judges: Tom Key, Artistic Director at Theatrical Outfit, Andrew Alexander from Creative Loafing and Atlanta Journal-Constitution, and Noel Morris from WABE. They would determine the Judges Winner. Paule then introduced the performers, and thanked the audience who would also be choosing their favorite composition with ballots of four simple colors: pink, purple, orange, and green.
The Pink team, with a piece titled Love in Idleness, was an irreverent exploration of

materialism. Set to Marvin Carlton’s jaunty melody and Sumita Chakraborty’s lyrics, the singers took whiffs of a magic potion from a gilded chalice and immediately fell in love with inanimate objects. Baritone Jonathan Spuhler did double duty, first with a polyester disco shirt (the mandatory prop), and then with a rubber chicken, hilariously serenading and fondling the synthetic piece of poultry. 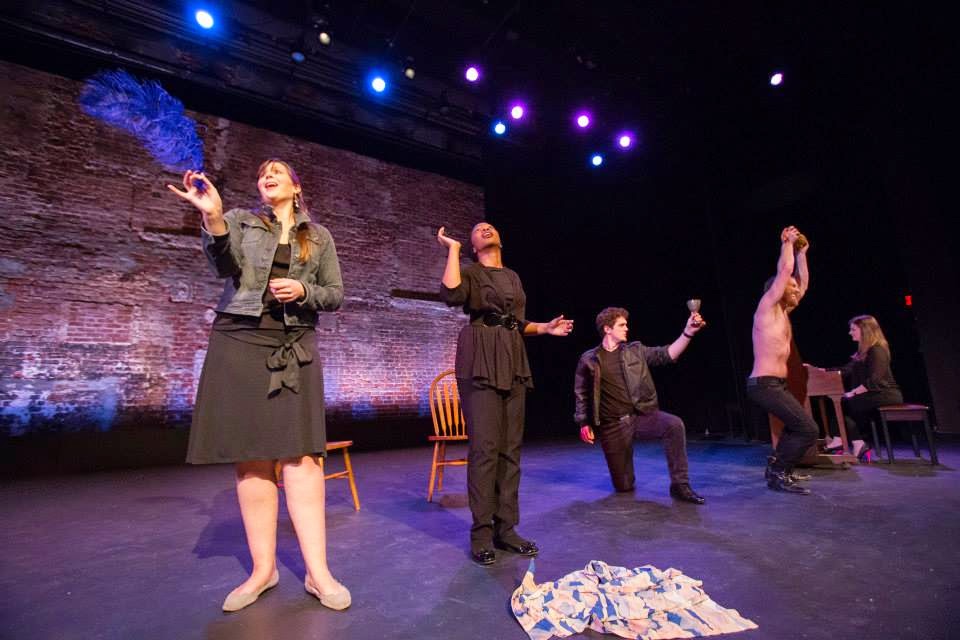 The Purple team was next with Our Needs Align. Using a black 1990s push button telephone as the inspiration, Composer Andy Bayles and Librettist Daniel Bosch explored both the differences and sameness inherent in technological changes. As Bosch explained, “Two times, two couples, the same problem.”
The Orange team presented Tuesdays with Pictures, which could best be described as Verdi meets Scooby Doo. Three ghost hunters (who identify themselves as “Paranatural P.I.s” in a catchy chorus) believe they can help the Andersons, who live in a haunted house. They show them proof of ghosts in pictures they took with their (prop alert!) camera. Natalie Williams’ score and Madeline St. Romain’s libretto was a perfect fusion of 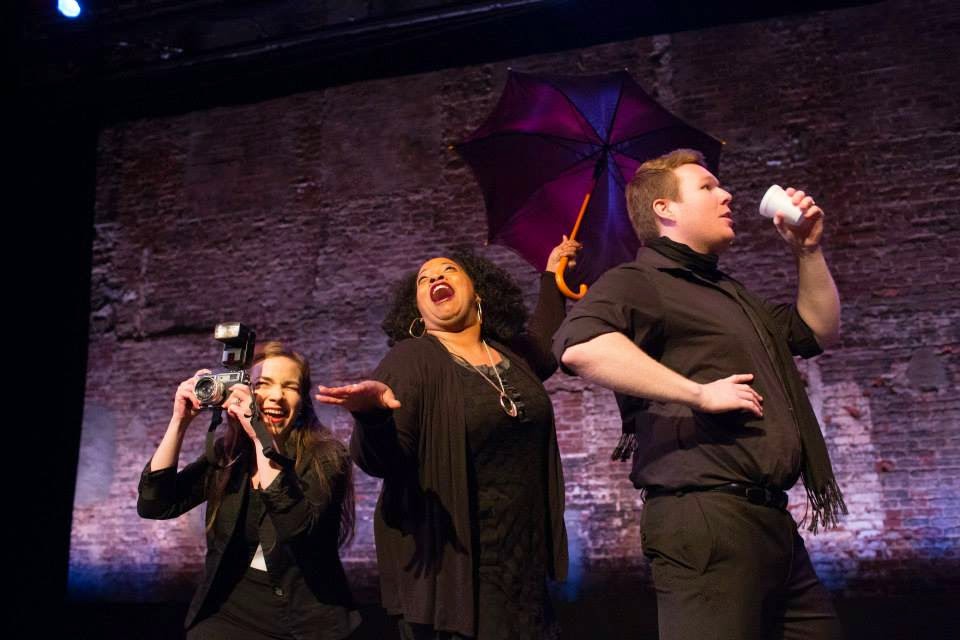 a sarcastic angle with mysterious overtones. By the end, we learn that the Paranatural P.I.s are actually ghosts themselves. In a society that is fairly well jaded by Law & Order plot devices, it was a pleasant surprise to know that a good mystery can still keep an audience captivated.

Finally, the Green team got political with the very funny Mother Nature, Sister Sludge. Composer Lauren McCall and Librettist Vynnie Meli, inspired by a bouquet of flowers, lambasted the rise of corporate greed and indifference for our home planet. Sister Sludge leads the audience in a melodic chant of “Reduce, reuse, recycle” to bring Mother Nature back to life, only to fall victim to the evils of human intervention.
It was time for the judges to deliberate and the audience to choose their favorite piece. As Key, Alexander, and Morris huddled in the lobby, baskets were passed down the aisles to collect ballots with four simple colors. Local comedy troupe Dad’s Garage helped to pass the time with gut-busting improve games and hilarious audience participation.
Paule made his way out to the stage, and called Pink, Purple, Orange, and Green to stand behind him. The judges and the audience had chosen their favorites (Drum roll, please…):

Judges’ Favorite: Our Needs Align (Purple Team)
Audience Favorite: Tuesdays with Pictures (Orange Team)
The audience immediately stood to their feet with a resounding applause. They had chosen a favorite, but they were clapping for everyone. The seemingly impossible feat of composing, writing, blocking, and performing four different operas in a 24 hour time span had proven possible. It was proof for the audience, but more importantly, it was proof for the artists. Those who walked in the door Friday and Saturday morning, hungry for a challenge, or merely trying to be brave, walked away from the 24-Hour Opera Project feeling more confident in themselves and maybe even a little more inspired when they would remember themselves as pink, purple, orange, or green.