Get to Know Jennifer Black 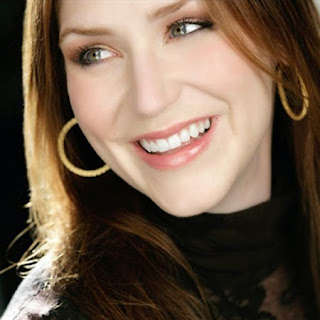 Jennifer Black is an energetic, charming and powerful soprano. She sings the role of Bea, Maddy’s grown daughter struggling in her marriage, in Three Decembers. We were eager to speak with Jenna (as she’s known) to discuss her approach, her love for Jake Heggie, and which continent she wants to travel to next.

You have sung a number of historic roles, including Mimi in La bohème
and Juliette in Romeo et Juliette. Does your approach change when you
take on a character like Bea?
Yes, my approach changes slightly. One, there
aren’t hundreds of recordings out there to gather information on style,
character temperament, tempo, etc, but the learning process remains mostly the
same. Sitting down with the score and working and working and working
until it’s fully digested. I pay a great amount of attention to the tempo
and dynamic markings, as I would with any role, but Jake is very specific as to
what he wants musically and I, of course, respect that. Bea is interesting
and full of so many shades and complexities. It’s been great getting to
know her.  She is a woman living in a time in which I have experienced
(1980’s, 90’s, 00’s). This also brings challenges as we see these
characters during a 30 year span but there isn’t time enough for full
hair/makeup changes, so I must incorporate that fact with my acting without
being over the top.  In contrast; for Mimi or Violetta, we see them
relatively healthy in the beginning of the opera. As those operas go on,
you experience their declining health. With Bea, I didn’t have to go too
far back in time to think about what her mannerisms might be, how she would
hold herself physically, her thought process, because the three decades we
visit in the opera I have experienced them all myself.
There’s no
“period movement”, as we would say, no corsets, no stylistic use of
certain props, no fountain pens or petticoats to incorporate. I LOVE all
those things, but this has been somewhat liberating to move freely on stage as
a person of the 20th and 21st century. She certainly does have her own
mannerisms and such, and sometimes Bea and Jenna share the same ones, and
making her “mine” has been a wonderful process with the help of our
awesome director, Emma Griffin.
What’s your view on
contemporary operas, like Three Decembers, written by current composers,
like Jake Heggie, as opposed to the classic operas, for example: Traviata by Verdi?
First, I must say, I LOVE JAKE.  I love
his work and appreciate him for being so involved with all performances of his
works and for making himself available to the people who are working on his
music.  This is rare and much appreciated.
Stylistically, this has been challenging and also
liberating.  Since Three Decembers is so conversational, it is very
important for us to incorporate and make clear all the text and meaning.
There are very few repeated lines and very few lines without a syllable on each
note.  But Jake writes in a way that incorporates lyric line in sections
of the opera, so keeping the text clear and lyricism smooth is a match made in
heaven.
His works are very different from most composers I have
sung; Strauss, Puccini, Mozart, Verdi, but I feel there may be a bit of Janacek
influence in his works.
If current composers know how to write for the voice
and instruments, FANTASTIC, I’m all for it. It is a skill to learn
because each voice part is different and presents challenges in different ways.
You’ve said (on
record, I may add)  that you have sung on 4 continents. Tell us about
those journeys – and – which continent would you like to make #5 on your list?
Continents!  Yes, North America, South
America, Europe and Asia.
North America is all in the US; North Carolina,
Minnesota, Arizona, New York, New Jersey, New Mexico, California, Virginia,
Connecticut, Florida, Texas, Tennessee…Georgia…The US is a fascinating and
diverse place and I love experiencing new cities and having the chance to
settle into their vibe for a few weeks. I actually keep a poster map at
home and add a pin to each new place I’ve been. A friend gave it to me as
a gift in undergrad for that purpose.
Europe: Mostly in France and some in Italy. I
adore most everything French, except for “la greve”, “the
strike” that always seems to be going on in some place or another. But, it’s part of their culture to do so, so be it. I’ve worked in
Toulouse three times and love it more each time. My languages get better
while I’m there!  French, of course, but you usually end up working with
Italians, Germans and people from the Eastern countries as well. I always
learn something new.
Asia; JAPAN. I love Japan. It is a great
dream of mine to go back.
I would love to add Australia to my list!  My
husband is Australian and we are there quite a bit. It would be lovely to
work in a country which feels like a second home and to be able to visit with
friends and family while there. My parents in law are loyal opera fans
and attend every Met HD broadcast in which I appear. And let’s face it,
Aussies are awesome.