Production Notes: The Pirates of Penzance (by Nicholas Beard)

We’re
forever fascinated by pirates. It’s a child’s fantasy to battle pirates – think
Peter Pan vs. Captain Hook – but it’s also an adult metaphor elastic enough for
a range of social commentary. By our romanticized view, pirates live off their
wits, live a hedonist life. They have escaped the conventions of a society
which, as every free-spirit knows, stifles creativity. As escapist fiction, literature
(Defoe’s “Robinson Crusoe” from 1719) and opera (Bellini’s “Il Pirata,” 1827) are
no less enthralling than swashbuckling films starring Douglas Fairbanks and
Errol Flynn and, today, the “Pirates of the Caribbean” franchise.

So
it was in the 1870s, when composer Arthur Sullivan and librettist William Schwenck
Gilbert started collaborating on English-language comic operas, a cousin to
sweetly sophisticated Parisian and Viennese operettas. The British duo had a commercial
hit with the nautical-themed “HMS Pinafore” in 1878. But within months
“Pinafore” was spreading across America through – ahem – pirated productions,
earning the creators no income. 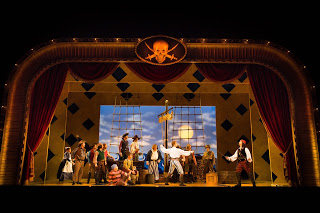 For
their next collaboration, “The Pirates of Penzance” in 1879, they followed
their familiar patterns by lampooning the police and the military, poking fun
at empty patriotism and, above all, satirizing the stupidity of a literal
devotion to duty. Our hero Frederic is “the slave of duty,” personifying the
operetta’s subtitle. In Victorian England, with an Empire stretching around the
globe, protected by the most powerful naval fleet that ever existed, “Pirates
of Penzance” was social satire with a sharp edge. That Gilbert’s lyrics and
Sullivan’s music does all this with such a light touch – tuneful, infinitely
clever, unexpectedly warm – is the stuff of genius. 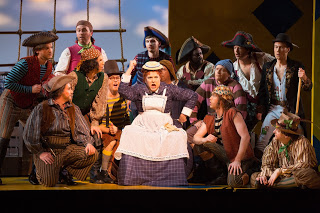 Early
in their collaborations, Gilbert and Sullivan established a formal structure to
their works: two acts, the first act concluding with a complicated finale in
several sections and the second act reprising tunes heard earlier. Like other
operettas, spoken dialogue (instead of operatic recitative) moves the action
forward, although their best works, including “The Mikado,” have found a home
in opera houses across the English-speaking world. Gilbert’s political
iconoclasm matched perfectly with Sullivan’s gift for melody and his skills in
orchestration, where he could parody music by a Handel, Donizetti or Verdi and
twist it to his own comic needs. As with the best satire, the more you know the
funnier it gets. 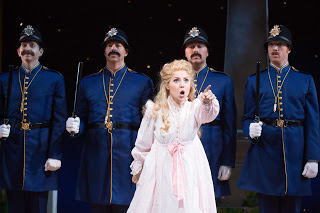 Key
points of “The Pirates of Penzance” plot are so daffy that audiences can’t help
but groan and giggle. And there’s no irony: all the characters are “naïve” to
their world, with no winks from the stage at their increasingly ridiculous
situations. For starters, the work’s title is funny: British audiences would
have known Penzance as a mild and slightly boring beach town on the English
Channel, the last place you’d expect to find blood-thirsty bandits of the high
seas. The characters are introduced by a series of wacky missteps. The nursery maid
Ruth had misheard “pirate” (instead of “pilot”) and had mistakenly apprenticed the
boy Frederic to the Pirate King – as if one trained into piracy as into any
other respectable trade. Gilbert’s lyrics emphasize the not-so-subtle difference
in pronunciation with over-the-top rhymes: “my lot/pilot” and “gyrate/pirate.” 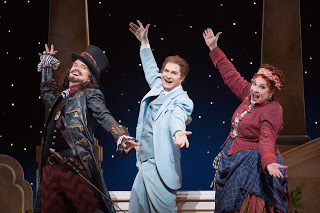 Now
21, bidding farewell to his masters, Frederic had accepted his duty (despite
Ruth’s mistake) and reveals his literal mindset: “It was through an error – no
matter, the mistake was ours, not yours, and I was in honor bound to it.” When
we meet the pirate band, we soon learn they are uncommonly polite and
empathetic, and word has spread that they will release all victims who claim to
be orphans.
As
in grand opera, the work thrives on its songs, and this is what makes “Pirates”
among the greatest of any operetta in the language. Mabel’s coloratura showpiece,
“Poor wand’ring one,” is set as a graceful, French-style waltz. In the ensemble
number “How beautifully blue the sky,” Sullivan sets the love duet between
Frederic and Mabel as a fresh, lilting waltz, dovetailing it into the chitter-chatter
of the women’s chorus in 2/4 time. It’s as silly, tender and brilliant as
anything in the G&S canon. 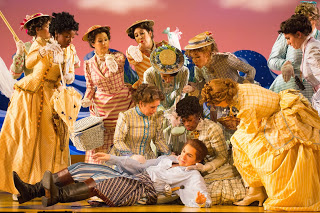 Perhaps
the most famous number of the score is the Major-General’s charming, clueless patter-song
“I am the very model of a modern Major-General.” At top speed, he spits out ghastly
rhymes with the high-falutin’ language of educated men –
“mathematical/quadratical” and “a lot ‘o news/hypotenuse” – all delivered in a
mock-pompous style. (As a comedy technique, it was adopted by generations of British
satirists, including Monty Python in our own time.) The Major-General’s song in
the second act, “Sighing softly to the river,” features a rippling watery
accompaniment that wouldn’t be out of place in Schubert lieder. But the context
is hilarious, with the men’s choruses mocking him unseen in the background,
parodying a similar scene from Verdi’s “Il Trovatore.” As with almost every
detail in “The Pirates of Penzance,” it’s easy to forget about the richness of
invention because the lyrics-music fusion seems so effortless.