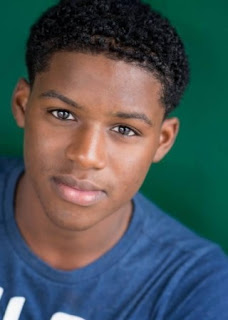 Khamary Grant is probably more put together than most adults. The young actor and singer is working hard at the Atlanta Opera’s High School Opera Institute, a one week intensive for rising 10th-12th graders at Emory University. Find out how he became interested in opera, and what he’s got planned for an exciting summer.


What grade are you in and where do you got to school?

I’m a rising senior, and I go to Veritas Classical School. It’s part home schooling, part public school so that we can interact with other kids.

I came out of the womb singing, let’s just say that. I’ve always been singing. When I was 14 years old, I was exposed to musical theater at Atlanta Workshop Players. Since then, I’ve just been going on this journey, discovering new things, now classical music. I’ve been performing musical theater for about three years now. I didn’t have a lot of training, but I did just sing and have fun doing different shows like In the Heights and Hairspray. I was Seaweed, which is easily my favorite role to this day. But that’s how I got into voice, just being exposed to the musical theater world.

What activities are you involved in at school?

They don’t really have a lot of performing arts activities at school, so I spend a lot of time at Atlanta Workshop Players, where I’m part of their professional company, and the travel show they’re about to do. I’ll also be singing in a few upcoming events with them.

What are you most looking forward to learning at High School Opera Institute?

I want to learn about the different things I can do with my voice, like control and vowels. I just started my classical training, and one of our instructors told me that there’s so much more to my voice that I just don’t know yet. She told me I have a lot of potential. By adding classical music, there are so many possibilities for me now. That makes me super excited!

What are you favorite pieces to sing?

“The Impossible Dream” from Man of La Mancha. It was one of the first pieces I ever learned, and I fell in love with is the first time I heard it. I also like Per la gloria d’adorarvi -that’s the song I’m learning right now.


Any other plans for the summer?

For the rest of the summer I’ll be auditioning a lot. I do a lot of television and film acting. I have an agency here called People Store, and then one in New York called Clear Talent Group. I’ll be a camp counselor for two weeks at an overnight camp at Oglethorpe with Atlanta Workshop Players. After that, I’ll be traveling to Madrid with my family.

What’s your plan for the future?

I definitely want two Oscars. My acting coach gave me a goal I’m trying to achieve: by the time I’m 21 years old, I no longer want to be auditioning. I want to be having meetings with people. I want to walk into a room, and have everyone know my name, but for the right reason, like my work ethic. I also want to be able to have enough power and influence to use my music and talents to create change in the world.