Tom Goes to the Opera: The week of “wow”

As an actor, Theatrical Outfit Artistic Director Tom Key has appeared in over 100 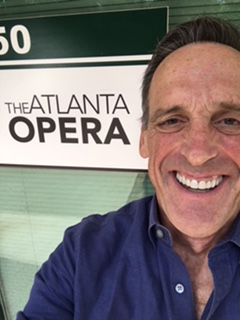 productions from off-Broadway to Los Angeles. He also co-authored the hit off-Broadway musical, Cotton Patch Gospel, with the late Harry Chapin. Suffice to say, it seems like he’s done and seen it all…except opera!

Every week, Tom will share his inner monologue as he experiences the process of rehearsing and performing in an opera for the first time, as Pasha Selim in The Abduction from the Seraglio.
Week #1

Wow.  My first day of
rehearsal, for my first role in an opera, and the word of the day is
“wow.”

“I have a blinding flash of the obvious: I’m going from the audience into the very same room with these artists who make the ‘wow’ art form.”

The first opera I ever saw was in
NYC when I was 14-years-old and it was Aida in the old Metropolitan Opera House. When I realized that those were real elephants on the stage and when I
heard the first voices fill, not only the auditorium, but my very soul, that
was a “wow” day too.  Now, today, in a
brightly lit Atlanta Opera rehearsal hall at 11 a.m.

when we are assembling for
the first time in a “meet and greet” with the staff and one another, I have a
blinding flash of the obvious: I’m going
from the audience into the very same room with these artists who make the “wow”
art form. There won’t be a football field’s distance and
an orchestra between us. We’ll all be
wearing contemporary clothes.

Then, it
begins and I’m actually face to face meeting opera singers, our opera director,
Chris Alexander, shaking their hands, and talking with them. There’s my friend
and colleague, Tomer Zvulun, who wildly invited me to this party, and there’s
an absolutely fascinating presentation by Chris of his vision for this Mozart
comedy, and I have to keep checking to make sure that my jaw is not dropped and
that my eyes aren’t open four centimeters wider like they probably were at Aida. My running inner dialogue is something like, “this is so great— I
can’t believe I’m here—when they start to sing right next to me will I explode?” Three things anchor me into behaving like a
reasonably cohesive professional: Tomer’s welcoming joy for all of us, Chris’s absolute
mastery for storytelling, and the fact that the refreshments for this first day
morning reception included chocolate cake. Opera people have great priorities. Wow.