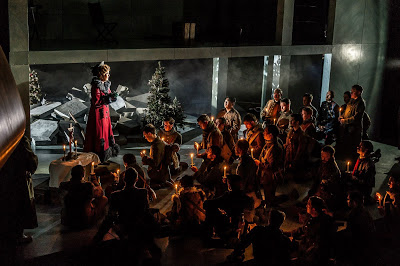 From the first moment that I listened to Silent Night, it
deeply touched a personal side in me. Kevin Puts’ music along with Mark
Campbell’s libretto uniquely captures the dichotomy of love and WAR and creates
a world that is both specific and universal at once. It captures the humanity
of the characters and the comforts that friendship and music bring to the
bloodiest and most inexplicable of all human experiences — WAR.
WAR, whether today in Iraq, Israel, or a century ago all over
Europe, evokes a chaotic, surreal world. The characters that inhabit this world
are completely lost in it. As often is the case in WAR. Our production was
conceived as an entangled nightmare that progresses vertically. The structure
of the opera is extremely intricate and complicated.  The space is the key
to the concept: It allows for the fluidity that the storytelling requires.
Frequently, the vertical nature of the set allows for simultaneous action on
different levels.
As an Israeli, I know WAR very intimately. From the Lebanon WAR in
my childhood in the 1980s through the intifada and the suicide bombings in the
streets of Tel Aviv in the 1990s to the endless battle at the Gaza Strip, WAR
is a state of being in Israel.
In the early ‘90s, I entered the most surreal situation possible
for a carefree teenager: I served in the army for three years as a medic in a
combat infantry unit.
As a young 18 year old, I learned a thing or two about violence,
fear, loss, and the constant brush with death. I learned to shoot, fight, run,
hide — not only physically, but also emotionally. Hide the fear of dying
young.
What got me through that time and stayed with me forever was the
humanity that I found in every daily situation with the members of my unit. I
remember the strong friendships we formed, the coffee we would share on endless
nights, the music we listened to in sentry, and the stories I heard from my
comrades about their girlfriends, mothers, loves, lives, homes … most of all,
we were recognizing that we all hid the same fear: that we may never see them
again.
That is the most fundamental aspect of being a soldier: missing
the ones you love, your family, your home, your innocence, your youth. Those
may be lost forever as soon as you put on uniforms and walk out the door.
That’s why I found the story of Silent Night so moving,
personal, and yet universal at the same time. Each one of the characters is
acutely aware of his mortality, fears, and loves. In the midst of this
unimaginable time of terror, the music, friendship, and humanity emerge to
provide a momentary solace from the horrors of that futile WAR.
Tomer Zvulun Dedicates this production in memory of Avi Maimov who was killed in action on the hills of Jerusalem on September 26, 1996