Pick Up Your Q: Rolando Salazar 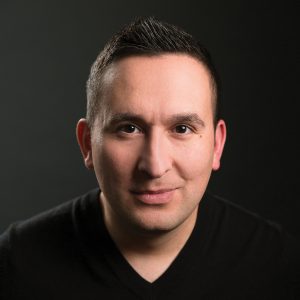 Music Administrator Rolando Salazar began working at The Atlanta Opera in 2015, and since then, he has worn many hats. Since the departure of longtime Chorus Master Walter Huff, Salazar has stepped in to lead The Atlanta Opera Chorus in the meantime, and recently facilitated the general auditions in June. We chatted with him about the huge task of casting chorus members, audition prep, and what makes a cohesive opera chorus.

Tell us a little about yourself: where did you grow up and how did you get into music?

My three passions are opera, country western, and sacred music, but not necessarily in that order. This season I will be serving as interim Chorus Master and Assistant Conductor for each production in the 2017-18 season. In addition, I will continue to coach and work with the Atlanta Opera Studio each week on solo rep, roles, and the Studio Tour. I moved to Atlanta seven years ago to study conducting at Georgia State University. I had previously been living and working in Amarillo, TX, and worked with Michael Palmer as his assistant at the Bellingham Festival of Music in Bellingham, WA.

I have a funny history with Atlanta. When I was in high school, I was a singer and had been very successful in competitions – UIL and those types of things. One year, the Texas All-state Choir rep included the Verdi ‘Quattro Pezzi Sacri.’ Being from Beeville, a small town in South Texas, I had zero clue about what I was singing or what being a good singer really meant. One afternoon at a rehearsal, my choir director, Penny Lamberson, gave me a CD of the Atlanta Symphony Orchestra and Chorus under Robert Shaw performing the Verdi and the Stravinsky Symphony of Psalms. I had never heard music like that. That recording, that very night at home changed my life and inspired me to want to be in music.

A few years later right before college I started my piano training with my former middle school chorus director, Cheryl Roberts. When I started college I had been playing only for about three months, but soon discovered that I could sight read. The piano skills developed, the singing developed, and that then took me down the path of wanting to be a conductor. Conducting allowed me to sing (yes, I do sing often in private coachings) and work with choruses, amazing soloists, and orchestras.

Upon arriving to Atlanta on the invitation of Michael Palmer, I fell more in love with the music scene and all the wonderful singers and instrumentalists in town. The talent in Atlanta in incredible! I often pinch myself in coachings and rehearsals, or I play a recording of the Verdi ‘Quattro’ on my way home from a long day at the office because it reminds me that the Atlanta music scene, in a weird and distant way, played a hand in my development as a musician, and I am honored and humbled daily to be able to give back in so many ways.

What is your casting process for putting together a cohesive opera chorus?

The score. One must always go directly to the score and see what the composer intended in his or her writing. In addition to looking at divisi and the character of the writing, one must also be aware of the accompanying forces in the pit. For The Flying Dutchman we have opted for forty men and twenty women. The basses have to have good top Fs, the first tenors have to have great high B flats, and the women must be able to sing beautifully and in tune as an ensemble, as well as match twice as many men and a strong orchestra underneath. I also like to look at the text of an opera as it really helps to identify what sort of approach to the sound I would like to take, sometimes measure by measure, sometimes even beat by beat. Once this “sound” is set in my head, I look at the voices we have available and start piecing together each section, one person at a time, until the entire chorus is cast. It’s like a great big puzzle, and it takes hours to put it together, and the anticipation increases daily for that first chorus rehearsal to see how it’s all going to work out!

During auditions, is there an “it” factor you’re looking for, or is it more technical than that?

There kind of is an “it” factor, but it is very difficult to explain. For me, that “it” factor is what the voice does. How does it fill the room and make the air seem to vibrate? How does it fall on our ears and go through our bodies? What about the dynamic range and technical ability? Is is powerful, beautiful, exciting, unique? Does it move me? Having sat on numerous audition panels I can tell you we always want to hear people sing their absolute best. It is thrilling for us listening to feel the energy, the focus, and hear great vocalism from a singer. It really usually takes a few notes to grab or lose a person listening. Presentation, confidence, and choosing pieces that show off the best of your singing go a long way. And even if all these things are present, or not, the sound of the voice itself, that “it” factor, is what will win a person an audition.

Besides knowing the material, what else should singers do to prep for an audition?

Every singer is different, and I have all the admiration in the world for all they must go through before an audition or performance. For some that means hydrating all day and the night before, eating only certain foods, yoga, so many different things. My advice is to be sure you select rep that you can roll out of bed and sing well. Be sure you have coached your music before your audition. Don’t bring in something obscure that nobody has heard of. And I always tell singers, because this is what I try to do before a performance, use the nerves to your advantage!

Are there any audition pieces that you think are overdone?

I don’t really think so. Sometimes the nature of hearing sixty to hundreds of singers in a day makes it seem like pieces are overdone. If twenty sopranos come in and sing the same aria well, then I am happy to have heard every single one of them.

What makes a good chorus?

The singers, period. Great singing, commitment to creating another character on the stage, made up of the entire chorus, great acting, and loving what you’re doing!