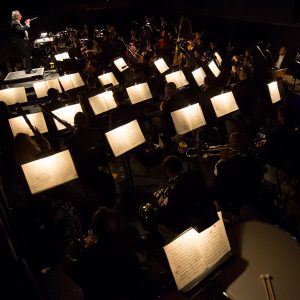 Richard Brady has played bass trombone in The Atlanta Opera Orchestra for 32 years, and principal trombone for two seasons. He answered a few quickfire questions in our new Spotlight series for orchestra and chorus.

AO: What do you do when you’re not playing or practicing the trombone?

RB: This has changed as I have gotten older. Before: martial arts, flying (I am a licensed pilot), cave diving, rock climbing. Now: hiking, camping, astronomy, ham radio.

AO: Where did you grow up and how did you get into music?

RB: I am a native Atlantan. In the fourth grade I started playing with a Southwest Atlanta elementary band program called the West End Elementary Band. An amazing number of top brass and wind players came out of the program.

AO: Any advice for young musicians?

AO: What genres of music and/or artists do you like?

RB: Oddly enough, I like pretty much everything. My favorites: Blood, Sweat & Tears; the Beatles; Earth, Wind & Fire; Johnny Cash; The Dear Hunter; Leah Partridge (she puts her whole being into her music).

AO: If you had to play any other instrument in the orchestra, what would it be?

RB: Cello. Other than the trombone, it is the closest to the human voice.

AO: What are your favorite musical moments in The Flying Dutchman, and what should audiences listen for in this opera?

RB: This is a stunning work. This will be the third production of this work I have performed in (including one production in Italy). My favorite moment is probably Act III, Scene 8 with the chorus. Always listen for the low brass!

AO: Overrated or underrated: “76 Trombones” from The Music Man.