Pick Up Your Q: Olivia Vote 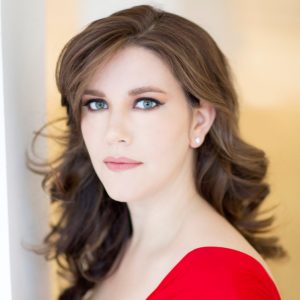 Mezzo-soprano Olivia Vote makes her Atlanta Opera debut as Mary in a new production of The Flying Dutchman. We chatted with her about Mary’s thoughts on Senta’s love interest, her process for each role, and what she watches during her down time.

Where did you grow up and when did you start singing?

I grew up in St. Mary’s, MD where both of my parents worked at St. Mary’s College. My dad is a professor of voice and a conductor, and my mom was an administrator, poet, and church organist. My world was full of music and art and I could not be more grateful. My parents like to tell the story that I sang my first art song at age 4. It was Du bist die ruh, by Schubert. I’m sure I was mimicking my dad who sang the song often.

Who or what are your greatest influences?

Besides my parents, I am lucky to have had some amazing professors and teachers along the way that truly helped me to realize my potential. James Allbritten, now the Director of Piedmont Opera in NC, was the head of the opera and choral department at North Carolina School of the Arts where I did my undergraduate degree. He was the first professor to truly tune me into the amazing world of opera. It was his guidance and passion that made me want to pursue a career in opera.
Some of my favorite singers are Tatiana Troyanos, Guilietta Simionato, Callas, Shirley Verrett, and honestly, Atlanta Opera’s very own Melody Moore. I was blown away at our first rehearsal of Dutchman and my admiration only grows as I’ve gotten to know her artistry and personal character. What all of these singers have in common is their complete and utter commitment to the music and the drama in their performances.

Tell us about your character, Mary.

Mary is the head of the factory and the household of Daland (Senta’s father). In our production, she is strong willed, educated, and one of my favorite choices is that she gets to be youthful (often she is portrayed much older and tired). It is her job to make sure that everything stays running efficiently while keeping watch over Senta. This proves to be a troublesome task as Senta has a very overactive imagination and sets her sights far beyond the confines of her life in the factory. I believe Mary wants the very best for Senta but finds it difficult to do her job and also care for Senta simultaneously.

How does Mary feel about Senta’s attraction to The Dutchman?

Mary actually introduced the story of The Dutchman to Senta. I believe she told it to her as a fantasy, like a campfire tale. She didn’t think that Senta would ever cling to it as much as she did, let alone believe that the story was real. Mary is tired of being asked to retell this story and is worried for Senta’s sense of reality. “The Dutchman again…let it rest!”

What is your typical preparation process for each role?

I start by reading the libretto, listening to a recording, and translating the score. After that, especially with Wagner, Strauss, or anything rhythmic, I go through and mark the beats and speak the text in rhythm. Then I start singing it into my voice and taking it to a coach. as far as building a character outside of the given text and history, I find that the music will tell you everything you need. Tempi can be physical  and vocal. Harmonies and cadences map out your moods and how long one is allowed to feel one emotion before another takes over. There is so much there to uncover.

You travel a lot. What do you listen to when you’re on the road?

Personally, I have to take a break from music when I’m on a job. I’m pretty partial to Master of None, Game of Thrones, Sherlock, almost any comedy special on Netflix, just to name a few.

Any advice for young singers?

There the givens: always show up prepared, know your translations, try and coach each role with someone who is native to the language the opera is written in, study languages as much as possible, be a good colleague, bring something to the table about your character while also being flexible and open with the director, and sing out in rehearsal as much as possible (Decide what is healthy for you, keeping in mind the stamina of the role you are doing).
Then, there are things I’ve noticed from endless conversation with colleagues. The most common topic: discouragement. The best advice I have ever heard was, Someone else’s success is not your failure! Try your hardest to focus on your path and goals and accomplishments. Comparing yourself always leads down a destructive path and never makes you a better singer or person.