Out of one horror, many stories 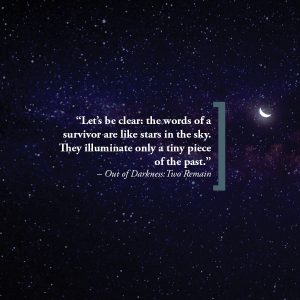 Depicting the Holocaust in the theater presents special challenges to audience members. Some may expect feelings of hopelessness, inevitability, and emotional exhaustion. American composer Jake Heggie’s Out of Darkness: Two Remain crafts a different experience. It reminds us that although countless stories emerged from that dark, dark chapter in world history, they often bring something richer, more nuanced, and more complicated.

Out of Darkness grew like a vine from a collaboration between the composer and the Seattle presenter Music of Remembrance. Initially, Heggie and librettist Gene Scheer explored the persecution of homosexuals (marked by pink triangle badges). The song “A Hundred Thousand Stars” refers to the estimated number of LGBT people murdered by the Nazis. Interest in Heggie’s 2007 song cycle (For a Look and a Touch) spread, and various versions followed.

The song cycle Another Sunrise, based on the life of poet, writer, and Holocaust survivor Krystyna Zywulska, came next, debuting in Seattle in 2012. Heggie and Scheer followed that with the song cycle Farewell, Auschwitz in 2013. It’s based on Zywulska’s Holocaust-era poems.

The seeds of this opera lay in the intrinsic theatricality of each work. As we’ve come to expect with Heggie, each was critically acclaimed but had a downside: As standalone dramatic works, none made for a complete evening at the theater. Opera companies found this prohibitive.

“I’m a pragmatist,” Heggie says. He began thinking about the synergies between the storylines — they’re both ghost stories — and realized they belonged together. The opera then took on a life of its own.

Learn more and get tickets