Pick Up Your Q: Tom Key 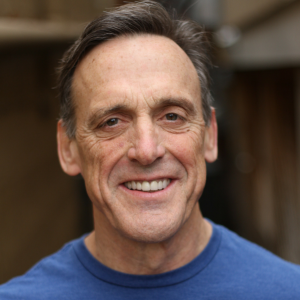 Actor Tom Key, who portrays Gad Beck in Out of Darkness: Two Remain

Veteran Atlanta actor Tom Key was last seen at The Atlanta Opera as Pasha Selim in The Abduction from the Seraglio. As the Artistic Director of Theatrical Outfit, he helped to pave the way for a multidisciplinary collaboration on Out of Darkness: Two Remain, which fuses opera with theatre and dance, and will be performed at the 200-seat Balzer Theater at Herren’s/Theatrical Outfit in Downtown Atlanta. In Out of Darkness: Two Remain, Tom is Gad Beck, a gay German Jew who is confronted with the memory of his lost love. We chatted with him about this exciting collaboration, singing for the first time in an opera, and the significance of this world premiere.

What is the significance of having Out of Darkness: Two Remain performed at Theatrical Outfit?

It’s Sam Jackson cool. There was a moment during the end of our capital campaign when the whole effort could have collapsed short of a million dollars. There was pressure to compromise our plan and just build with what we had. If we had done that, we would have had a mediocre space with poor sight lines and bad acoustics. We held out, raised the last million within four weeks of our deadline and how have the beautiful home for Theatrical Outfit, The Balzer Theater at Herren’s. I could never have imagined that Tomer would come in our home a few years later and name it the best theater space in town.

Then there is the wonderful fact that our building used to be Herren’s restaurant, where in 1963 the owner, Ed Negri, under great threat of violence, became the first to integrate by inviting Dr. Lee and Delores Shelton to lunch. The Atlanta Opera and Theatrical Outfit’s collaboration on Out of Darkness: Two Remain is the reason I believe that 84 Luckie Street continues to be a place of healing and community.

I love the synchronization that this piece should follow our production of Perfect Arrangement. In different genres, from comedy to drama, both companies are focusing a light on topics of the most profound significance about the LGBT community.

How important is it to talk about the themes of Out of Darkness: Two Remain in our current world?

It is essential. It is not for nothing that the same ancient culture who gave us the idea by which we govern ourselves is also who gave us the theatre as we know it. At a time when democracy is in retreat and the institutions and norms that have upheld it are fragmenting we need this story. Out of Darkness: Two Remain makes it real for the audience that to “forget” or to “remember” are two of the most powerful choices we make that effect our future and the future of our children. The finale of the opera is not the end to an entertainment; it is the compelling and urgent invitation for us to work together toward our promised, bright, and common destiny.

You first performed with The Atlanta Opera as Pasha Selim in The Abduction from the Seraglio, but this will be your first singing role in an opera. How did you prepare? 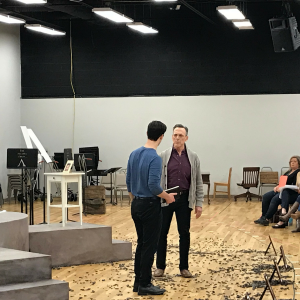 Tom and baritone Ben Edquist in rehearsal for Out of Darkness: Two Remain

When I read the libretto for Out of Darkness: Two Remain it was very much like reading poetry. Its meaning is not immediately apparent in a linear sense, but it is evident how it unlocks an incredibly powerful story that explodes in action between the characters. So, I learned the lines, meditated on them, let them incubate and then began to read and watch. I read Gad Beck’s “An Underground Life” and watched the documentary Paragraph 175; these were crucial to understanding this character and his journey.

I also began preparing the earliest I ever have – seven months out. Rolando Salazar happily agreed to meet with me last summer to work on “Farewell Auschwitz.” Honestly, I was prepared for him to say, “Tom, I think we have a problem and we need to talk to Tomer because you’re just too late to the game on this one to meet our standards.” Instead, after i had sung it through with him, he looked me in the eye and said, “Bravo.” I had sung with university choruses and in musicals before, but at that moment I felt like I’d landed on another shore of the brave new world of opera.

Out of Darkness: Two Remain is a true collaboration of opera, theatre, and dance. What has the creative process been like?

Mediocrity, lack of authenticity or a failure of courtesy are unacceptable within Tomer’s company. We show up intending for greatness, wanting to crack open the truth of the story and to do so with respect and kindness for one another. he continually asks questions, remains curious, dares us to stretch further, gently guides us to the best choices and celebrates our achievement when dramatic combustion is created. It’s a joyful process.

John and his dancers come into a room and transform it with their still, fearless presence. John will make a suggestion and create a movement–in the words of the libretto he offers a “look or a touch”–and the person to whom he is directing his nuclear creative energy is activated in all chakras. He begins with his dancers and it ripples through the rest of us in our words and voices and actions of our bodies in character. Their movement and energy perfectly supports, strengthens, and intensifies the story.

What are the challenges of the role?

The challenge is to not be overwhelmed by the enormity of the story and rather to stay focused step by step in the moment through to the end.

What is the most significant moment for Gad in this piece?

What should audiences expect at Out of Darkness: Two Remain?