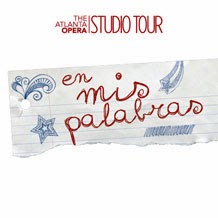 This year, The Atlanta Opera Studio
Tour features En Mis Palabras (“In My Own
Words”), a bilingual Spanish and English opera.  The Atlanta Opera Studio Tour has a long
history of presenting operas for children grades K-5, but this is the first
time we’re presenting an opera for tweens and teens in grades 6-12.  En Mis
Palabras is enjoyable for everyone, though, so bring your friends and
families to see one of the two remaining public performances.

In En Mis Palabras, you’ll experience a story about young Ana Maria, a
Hispanic teenager struggling to find her own voice and identity.  At the same time, her father has difficulty allowing
her to blossom into who she wants to be.
It’s an age-old parent-child dilemma to which any one can relate, no
matter their cultural background.

En Mis Palabras is told through the eyes of Ana Maria, an
artist who loves to draw and sketch. During Act I, the opera takes place in two
different rooms within Ana Maria’s house, and then it transitions into a
totally new look for Act II. The staging is very real, immediate, and
contemporary to keep the production feeling very intimate.

The Atlanta Opera’s
production of En Mis Palabras strives
to make opera accessible and relevant without pandering, telling the story with
the use of music and drama. “If the visuals, the story, and the music are good,
the people will like it because of the quality and because of the questions it raises,
not because it’s an ‘opera,’” explains Alison Moritz, stage director for En Mis Palabras.

Alison Moritz goes on to explain
the personal benefits of experiencing this opera.  “I
was introduced to opera at a pretty young age.
I saw my first opera when I was nine years old, and I was instantly
hooked. For me, the best case scenario would be for a student to see this tour
in their school and, if their interest is piqued, follow up by attending an
opera at the Cobb Energy Centre or by participating in some of the Atlanta
Opera’s other educational programming. I love opera and, to me, it can be as
modern and personally engaging as going to the movies or watching good
television – I’d love to share this with high schoolers.”

There are two
upcoming community shows of En Mis
Palabras, and tickets are only $7.  Buy your
tickets in advance or at the door.  Take
this opportunity to experience opera with your family!
Dates and
Locations for En Mis Palabras

Usage of any images on this blog is restricted to The Atlanta Opera and approved news websites. Any other usage, particularly for professional purposes, must have written permission. For additional information, please contact The Atlanta Opera’s Marketing Department at 404-881-8801.