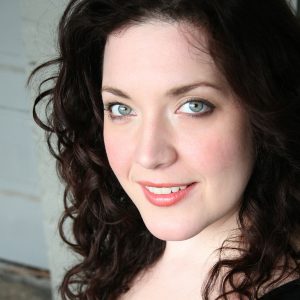 Marcy Stonikas has performed Turandot three times, and each time she is able to breathe new life into a truly challenging role. We chatted with her about the complexities of Turandot, what makes the character relevant today, and her favorite musical moments.

Where did you grow up, and when did you start singing?

I grew up in Elmhurst, IL, which is a suburb of Chicago. I was singing as soon as I could make noise, I’m fairly certain. I started piano lessons with my next-door neighbor at five, and was singing in church choir around the age of six or so.  I started community theatre in middle school, and did musicals, choir, madrigals and jazz choir throughout high school (all while also in band and orchestra), which is all what lead me to audition for various music programs for college.

Who or what are your greatest influences?

I would say that my greatest influences are a diverse bunch, ranging from my family to my favorite singers of the past, present and future (and from all genres of music). I find my performances are greatly informed by the love I have for my husband, and more recently, for my son. Being a mother has changed the way I view the world and how I interpret music, hopefully for the better.

What drew you to opera?

I started studying classical voice privately around the age of 15 or 16, and I was singing art songs and the occasional aria, but had never actually seen one until I auditioned for colleges. Symphonic music was probably a major gateway to opera, however, and I had been going to the symphony throughout high school with my friends, which probably seems strange to some people, but it was such a wonderful experience! I got to take the train from our little quiet suburb to the city, and then go hear phenomenally talented musicians (the Chicago Symphony Orchestra is still amazing!) play the music of Hayden, Mozart, Beethoven, Verdi, Mahler, etc. – I couldn’t get enough! Then my senior year I saw a double bill of The Old Maid and the Thief (Menotti) and the RARELY seen/performed Slow Dusk (Floyd) at Oberlin College’s Conservatory of Music, which is where I ended up attending. It was a perfect juxtaposition for me because I got to see one very charming, comical story and one very dramatic, lyrical one and they both struck a major chord with me. It probably didn’t hurt that I also related very much to the soprano lead of Slow Dusk; she became a very early operatic idol/mentor to me later on in school. I think the combination of my beloved classical music with singing was the lynch pin for me, and everything finally made sense!

What is challenging about the role of Turandot?

The biggest challenge I faced before first performing the role of Turandot was how to make her someone that I didn’t hate. I have always made it a top priority to find a way to make every character that I play 3-dimensional, sympathetic and unavoidably, a bit of me. This was something that continued to plague me as I walked into my first day of rehearsal with Renaud Doucet. After a relatively short conversation with him, I nearly started crying out of relief because his objective of turning her into a real person, and not the typical “black widow spider princess,” was so in line with my own thinking. That collaboration made my process so much easier because our end goals were the same.

What are some of your favorite musical moments?

One of my absolute favorite moments in ALL opera is the Act I finale (which I don’t get to sing, lol!). It has amazing orchestration and everyone is wailing away on their own individual lines; so cool, so beautiful. Another favorite moment is actually the Ping/Pang/Pong trio at the beginning of Act II. I never tire of the charm of these characters, and I love when I can watch the fun choreography from the wings and in rehearsal! And to not seem strange to exclude any of Turandot’s music, I absolutely adore the end of Act 2 as well on many levels. Again, it’s such an amazing moment in music with the chorus singing loudly and together; I always feel enveloped by their sound and it’s such a cool experience. And then to get to “break free” from their demands by soaring above them all on a couple of high C’s – that’s pretty darn fun!

Having performed Turandot before, has anything changed or evolved in your interpretation?

My interpretation of the role of Turandot after performing as her several times now, has absolutely evolved. I think one of the most fundamental changes that has occurred is that I am more comfortable in my role as a princess. I initially found it difficult to play someone of such a position, as it’s so foreign to anything that I know, really in any way. We don’t have a royal family in this country at all, and I wasn’t even sure how to move, let alone how to get around in the costumes on the challenging stage design. The other thing that’s probably evolved over the years has been that I am more comfortable letting the music guide me, motivate me, inform me. It’s all there: Puccini was the master of putting every little nuance into the score.

Do you see yourself, or women in general, in her?

So, hearkening back to a couple of questions ago, this was something that I needed to imbue into my first Turandot – a real person, a woman, MYSELF. My goal is to break down the perception of the commoners (chorus) so that the audience doesn’t just see me as a merciless princess but a woman who carries a lot of baggage. She has major shoes to fill, a lot of obligations to live up to, and she simply doesn’t feel that she needs a man in order to do her job well. These are all things to which I, along with other modern women, can relate. She doesn’t lure any men to come and court her – the suitors that perish have done so completely of their own volition, knowing full well of the danger in their failure.

How is the story of Turandot relevant today?

If you can strip away the title of princess and make Turandot’s problems more basic, everyone can relate to her on some level. Additionally, the reoccurring theme of someone willing to sacrifice themselves for the love of another person (both Liù and Calaf do this) is still very current. Sure, it may not be a matter of life and death, but we all make sacrifices for our loved ones regularly and would do anything in our power to prevent them from harm.

Usage of any images on this blog is restricted to The Atlanta Opera and approved news websites. Any other usage, particularly for professional purposes, must have written permission. For additional information, please contact The Atlanta Opera at 404.881.8801